Over the last six years, Baruch Zeichner, creator of the Paradigms radio show, had produced about 200 programs, archived as podcasts on a creaky, old Flash based website the size of a postcard. Baruch had a following of listeners on iTunes, but his website had become non-functional as a distribution channel.

Baruch hired me to build a new website with a modern look and functionality. I build sites in WordPress, so I installed the blubrry PowerPress podcasting plugin to provide the necessary podcasting interfaces and functionality. I configured the plugin to connect with Baruch’s existing iTunes account (rather than create a new account, which could cause him to lose his iTunes subscriber base) as well as RSS and Android app feeds. Site visitors can subscribe to any of these feeds from nearly every page on the site.

The new site was built on a new hosting account to which the media archive of 200 MP3 podcast audio files had to be migrated. Each of these audio files had to be re-associated with title and description information corresponding to the individual episodes, which I extracted from the existing XML feed files with a custom script. The process was only semi-automated however and I relied on the client, Baruch, who was comfortable with editing on the computer and intimately familiar with the details of each episode to make manual adjustments and corrections where necessary.

A key adjustment was the re-creation of the image associated with each episode. In the original site, the images were limited to 100×100 pixels (like a tiny postage stamp). With the new site, much larger, higher resolutions images were feasible. Once again, I delegated re-creation of the episode images to my technically proficient client.

The end result was a completely refurbished podcast feed that included the pre-existing episodes (with updated graphics) merged seamlessly with newly created shows so that current iTunes subscribers could access old and new episodes without needing to make any changes to their subscription settings.

Each podcast episode has its own page, and can be played or downloaded from the player on that page. The latest podcast is featured at the top of the home page with a player there as well. The six next most recent podcasts are presented a bit lower down on the home page. Podcasts are also archived by year, with each year archive page containing all the podcasts published that year.

This site generates some income from a donation page linked in to the client’s PayPal account. Additional income comes from the AdSense ads displayed in the sidebars of the individual podcast pages as well the yearly archive pages.

Paradigms is a radio show concerned with the viability of life on earth, so I suggested earth tones for text color and page divider elements over a page background of sand ripples. Constructing the website header graphic required special consideration to incorporate two images with special significance to the client.

The first image was that of planet earth, as photographed from space, included at the left side of the website header. Then the title, PARADIGMS, in a heavy stroke-width font masked an enlarged section of the earth photo, so that the letters themselves filled in with the land, sea and sky terrain coloring from the earth image. Positioned on the right side of the header is the “green spiral” image, derived from a photo taken by Baruch that held emotional significance for him.

Baruch further specified that the header should have a particular animation sequence where a spherical universe coalesced into the image of the earth globe and then have the green spiral unwind over the earth and have the earth restored to full radiance. I accomplished this with an animated GIF overlay to the actual header image coded to maintain spatial relationship even while the page (hence the header) was resized. Here’s the result (click or tap the image to replay the animation): 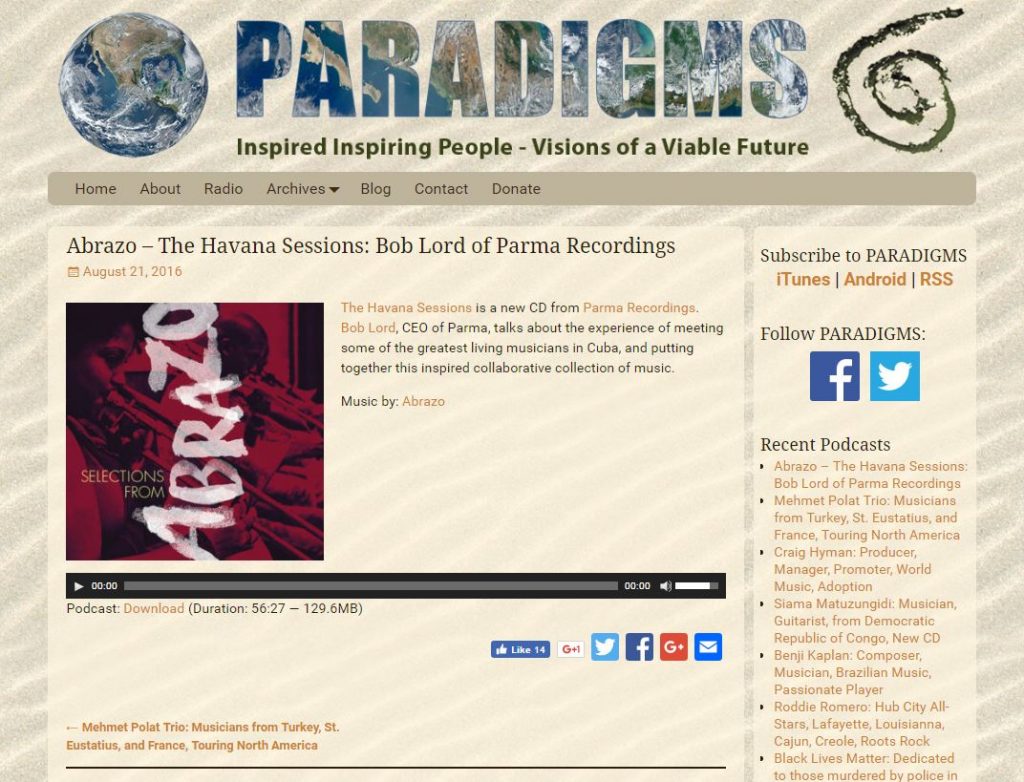 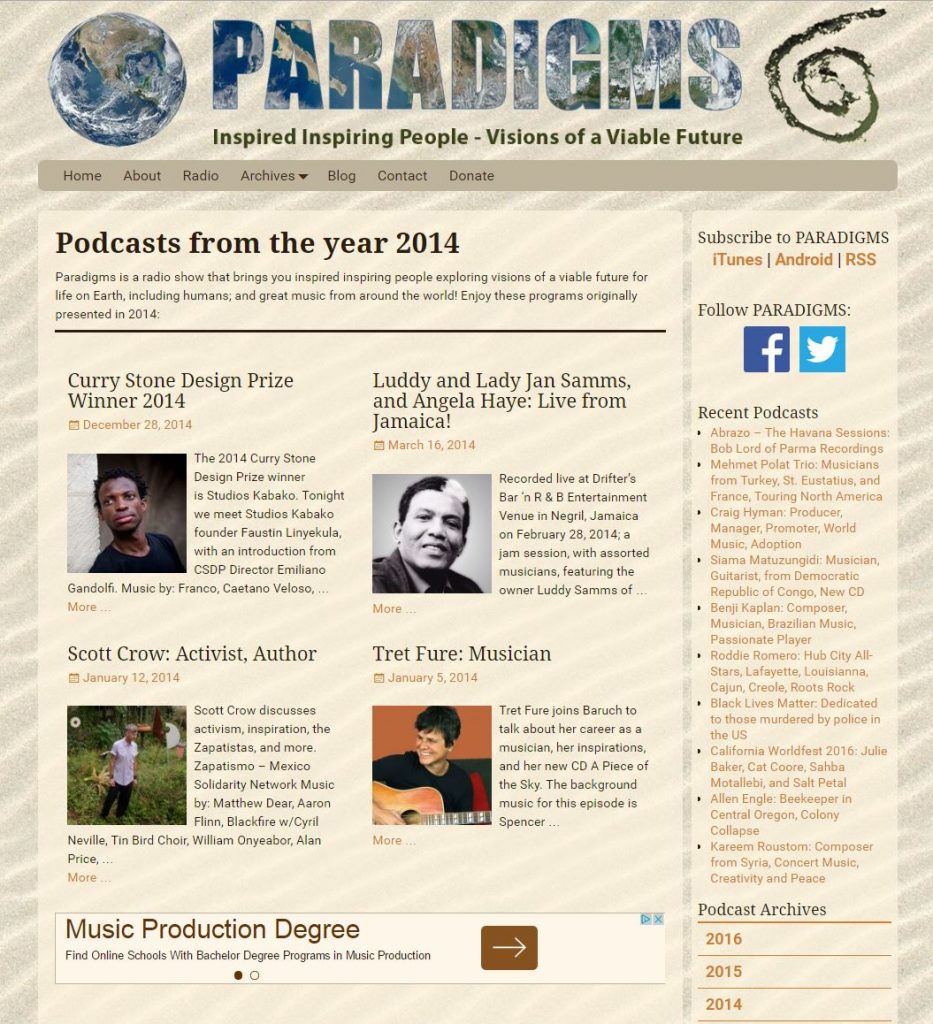 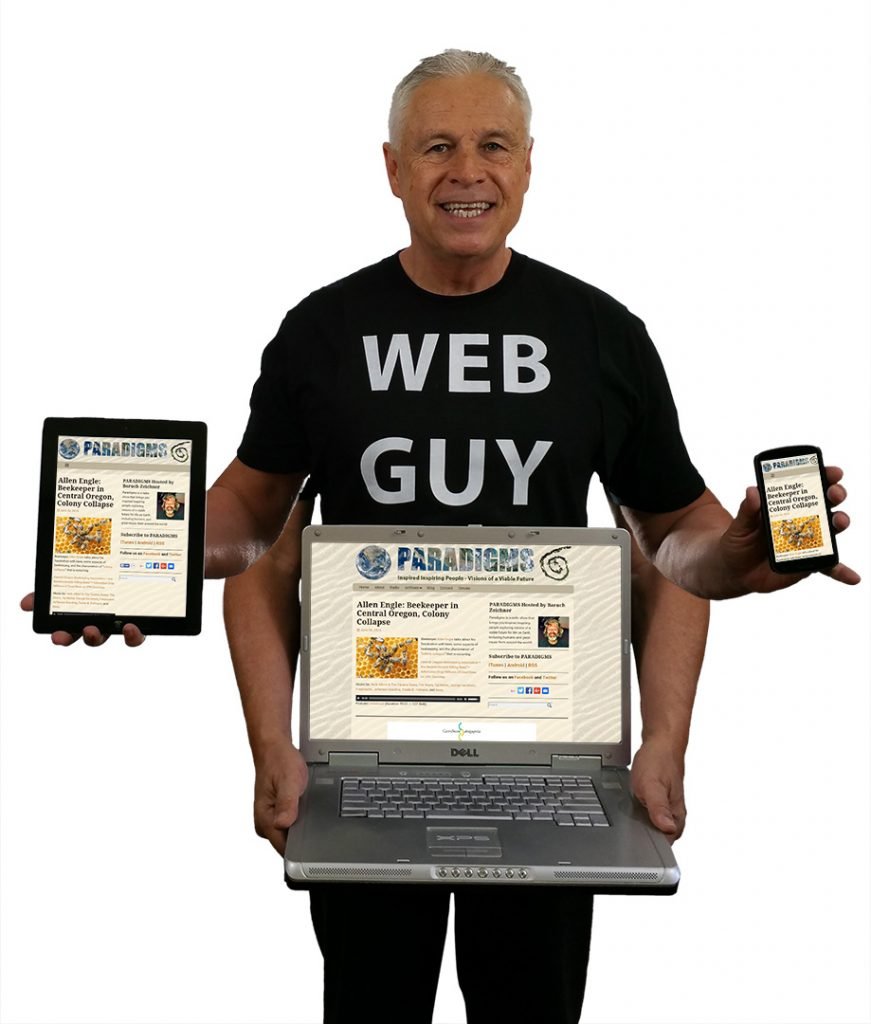 Paradigms.life is a fully responsive website, adjusting intelligently to any screen width.